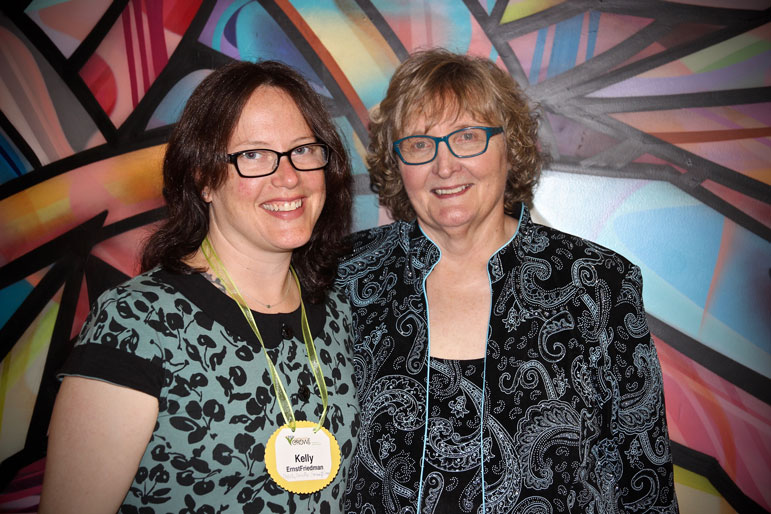 Wednesday, October 4, 2017 was an amazing night to celebrate 23 years of CommunityGrows and Barbara Wenger’s upcoming retirement as founder and Executive Director.

The African American Arts and Culture Complex (AAACC) was abuzz with activity from early morning, setting up the Hall of Culture and firming up last minute details. Barbara Fujimoto, former Advisory Board member, donated the beautiful flowers and huge pumpkins for our decorations (thank you Barb!). By 4pm a few of our BEETS (Band of Environmentally Educated and Employable Teens), Eluis, Jennifer, Vihn, and Michelle, arrived with Advisory Board members Jaromy Schmidt, Liz Holt, Catheline Leung, Maricel Guinto, Jessica Jauw, and Christina Mathis to volunteer with setup and our silent auction. 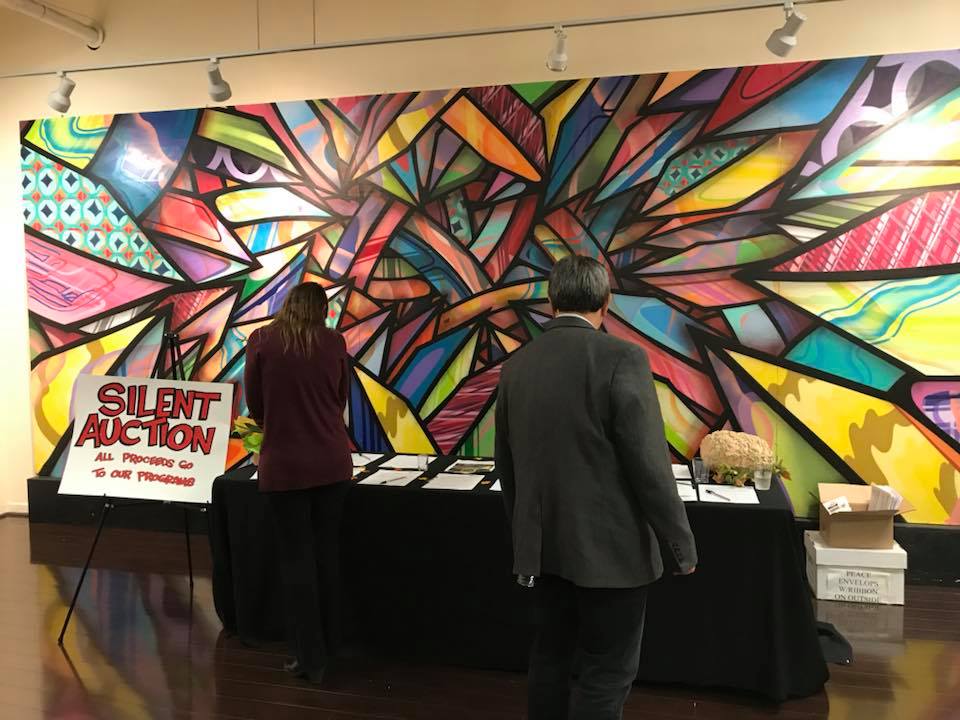 Staff and VISTA employees Karen Lally and Laura Witzig also did a lot of behind the scenes work.

Sophie Constantinou, Partner/Director of Citizen Film, arrived to set up the sound and video work with Kevin Myrick, Director of Synergy Moon and sound director for the AAACC. Name tags were laid out… 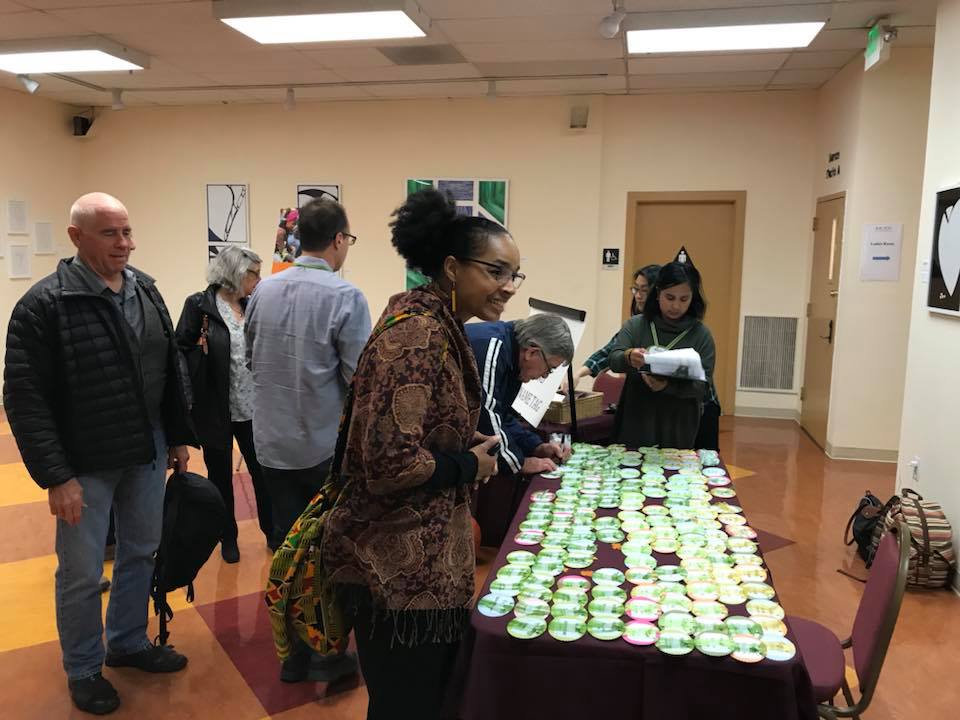 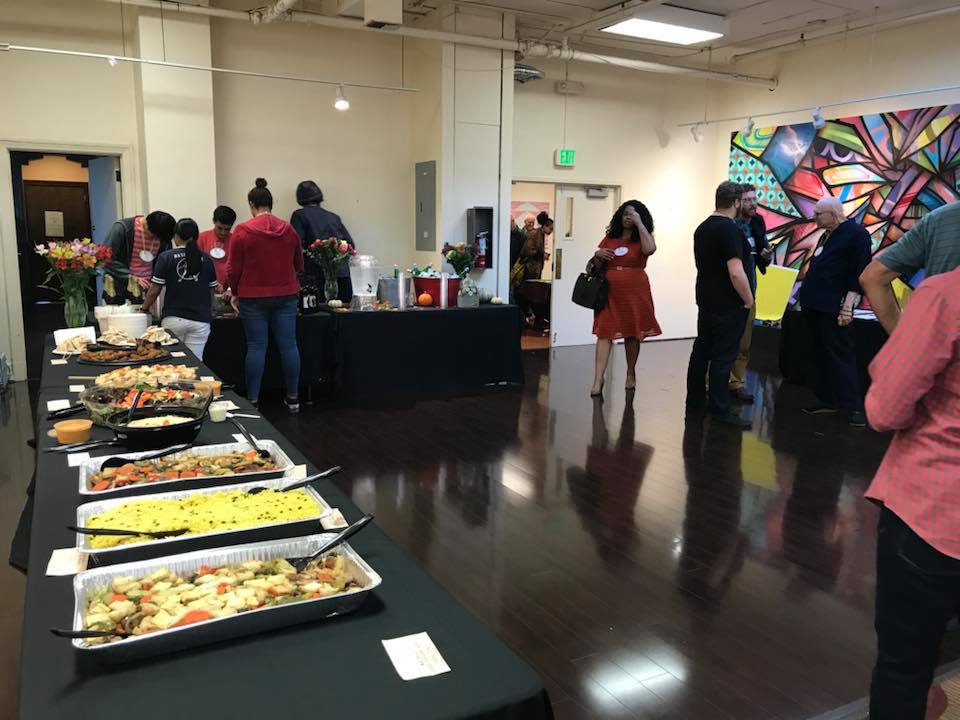 Jaromy Schmidt, our Advisory Board co-chair and Starbucks District Manager, brought delicious cake pops and homemade cupcakes with the help of Liz Holm, also an Advisory Board member and Dual Store Manager at Starbucks. 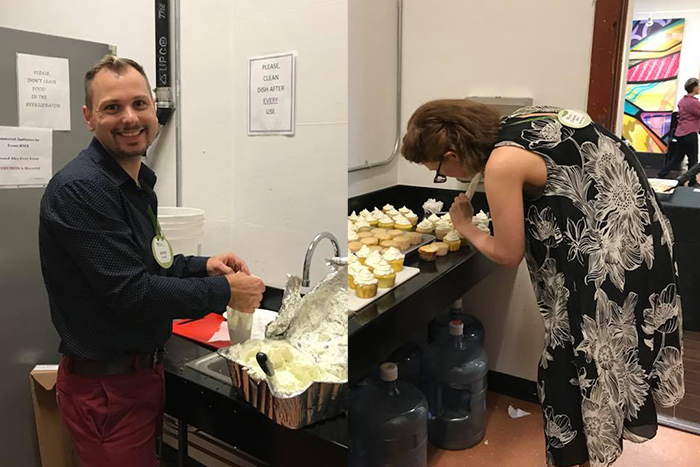 Over the past few weeks Barbara had been dreaming about all the people that were invited to the party—friends she’d made over the past 23 years. These were friends from her past, from former employees to friends from the neighborhood. There were friends from Hayes Valley, John Muir and Rosa Parks Elementary Schools, the San Francisco Zen Center, youth organizations, partners, City dignitaries and employees, the Tides Center (CommunityGrows’ fiscal sponsor), consultants, funders, and supporters of CommunityGrows. So many of these people showed up to celebrate with her. It was truly a celebration of life! 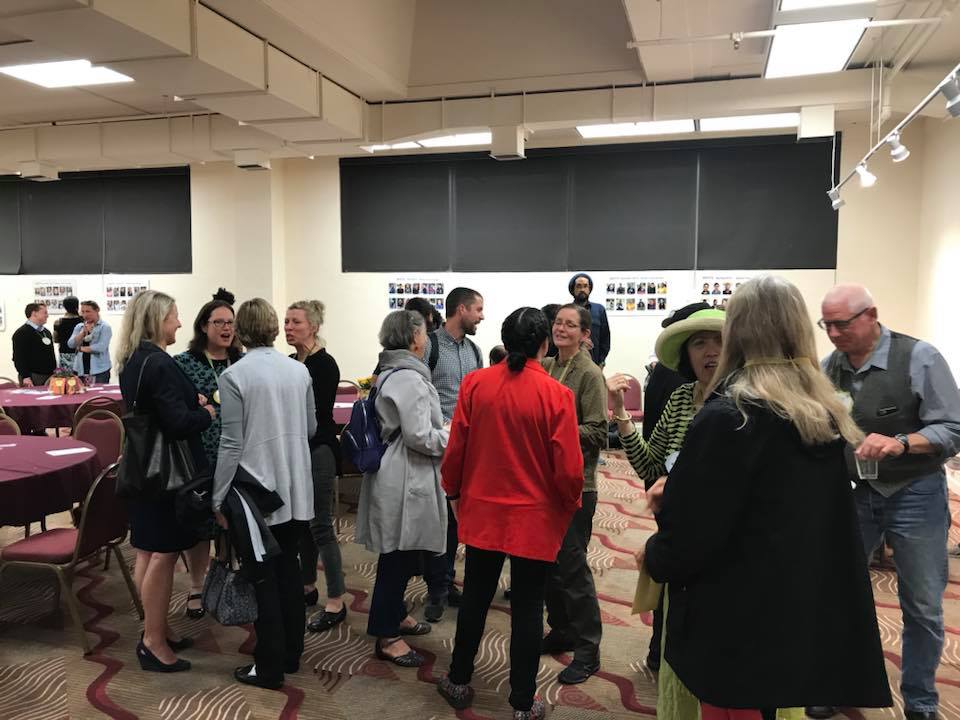 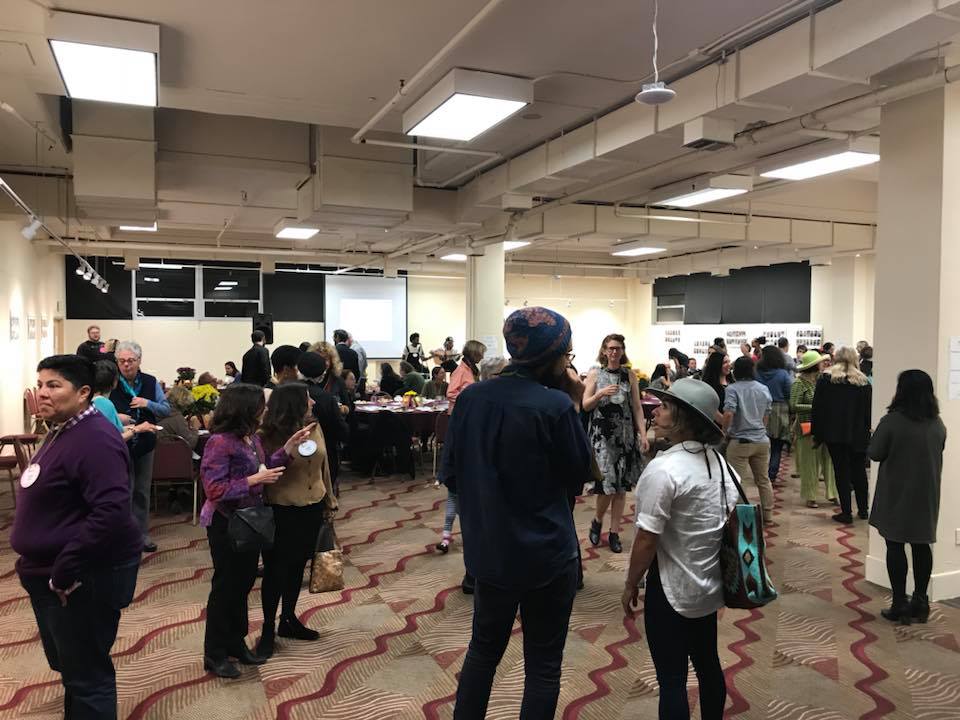 Barbara thanked the AAACC staff and their two new Executive Directors, twins Melora and Melonie Green, for hosting the evening.

The AAACC has been our home office for the past five years. We feel very grateful to serve the community in such a beautiful, vibrant building, which contains such institutions as the African American Shakespeare Company, the Lorraine Hansberry Theatre, AfroSolo, Cultural Odyssey, Project Level, dance and recording studios, and functions as an art gallery and historic center.

The night was about reconnecting, cultivating and supporting the future of CommunityGrows. Along the walls of the Hall of Culture event space, photos of over 150 of our BEETS teen program participants reflected ten years of the program, as well as highlighting some of the 1,300 youth we serve each year. Here are some guests from the evening…

Will Newsom was our Master of Ceremonies, introducing everyone and keeping the program moving along. Speakers came to offer their praise and stories about Barbara, including President of the San Francisco Board of Supervisors, London Breed; Director of Public Works, Mohammed Nuru; Director of the Human Rights Commission, Sheryl Davis; and General Manager of the San Francisco Recreation and Park Department, Phil Ginsberg. It was an honor to have them there.

One of the highlights of the evening was the music by Con Brio lead man, Ziek McCarter.

Ziek came to us in 2011 as one of our BEETS. He was a very shy and introspective guy. Soon after being a BEET, we hired him onto our staff to be a Garden Educator at Rosa Parks Elementary. Music being his passion, he soon broke out with Con Brio, which is now one of the premier rock, pop, and soul bands in San Francisco and the world. They go on tours through Europe, Australia, and Japan (where they are number 8 on the pop charts)! We have deep love for him and were so happy that he and his bandmate came out to play for us that night. 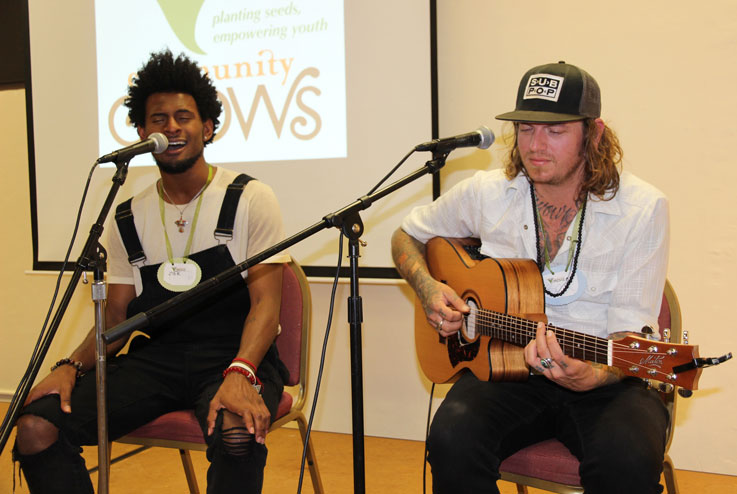 Barbara introduced the staff and Advisory Board of CommunityGrows and our new Executive Director, Kelly ErnstFriedman, who has been with CommunityGrows for the past three years as Director of Programs and Deputy Director. Kelly has a decade of experience working with nonprofits increasing program performance and impact, grant writing, staff management. She has a PhD in Cultural Anthropology from American University in Washington DC. Since she’s been with us, she’s expanded programming evaluations, streamlined and strengthened our operations through better record keeping, financial reporting, and engagement with the Board. With the help of our Board members, she secured two AmeriCorps VISTA volunteers last year, increasing our staff capacity by 80 hours a week! We know Kelly will take CommunityGrows to even greater heights!

Barbara also thanked the Koshland Family who gifted us Koshland Park and the Community Learning Garden over 44 years ago. This park and garden continues to be our home-base site for John Muir Elementary School day classes, as well as after-school and summer programs. It is the site of the Western Addition Peace Wall, a seven-year project that honors the families and youth of this neighborhood. The Koshland Family has continued to support our presence in the park and garden and we owe them our deepest gratitude.

Another highlight of the evening, introduced by CommunityGrows Director of Programs, Melissa Tang, was a surprise video done by Citizen Film in honor of Barbara, thanks to Sophie Constantinou.

Many of Barb’s dearest staff and friends talked about the impact she made on the lives of so many people. It was a beautiful tribune which brought tears to our eyes. Here are more guests from the evening…

Finally, Barbara tried to answer one of the burning questions of the night. “What am I going to do when I retire?” Here is what she said: “While I’m happy to be leaving this organization with a young, smart and devoted crew, I want to be outdoors more, as well as pursue the visual arts. I envision walking in a forest as a park ranger or being an assessor of our national parks and old lodges throughout the United States. I also hope to be creating and studying art. If anyone has leads of a part-time job doing these things, let me know.”

An amazing crew of Advisory Board members and others stayed to clean up and put the Hall of Culture back to it original self.

It was a night to remember and one joyously celebrated. Thank you everyone! 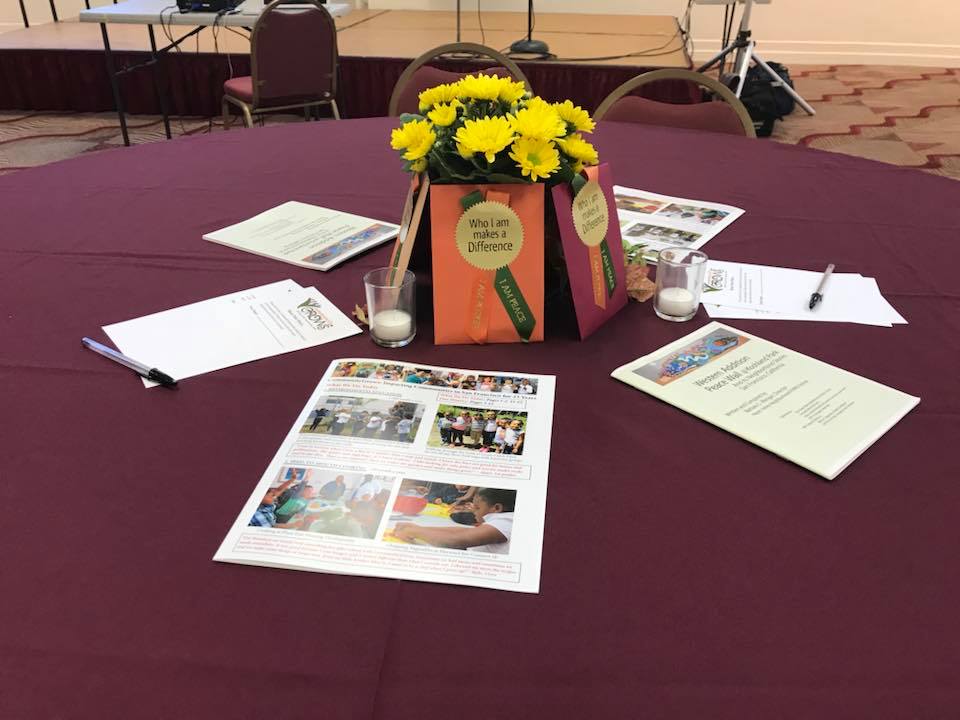 For more photos, most taken by our gracious photographer, Judith Keenan, see our Flickr Photostream here.

Donors: Thanks to all attendees, and to those who donated but could not attend.