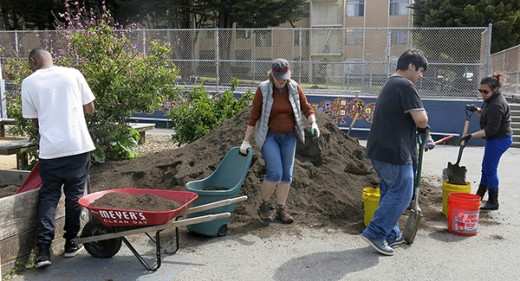 On April 26th, 2014 CommunityGrows participated in a media campaign, “One Day in San Francisco,” a participatory media-creation event. We did this during our Rosa Parks Elementary School gardens workday. We documented stories and investigated 10 questions for the future of San Francisco. The resulting media will be showcased in an interactive geo-tagged archive and a TV series on the future of the American city. The media event hoped to take a closer look at how urbanites could better live together in tight communities, with the best services that provide opportunities for the future.
Here is an interview of Rodrick Irby, one of our BEETS (Band of Environmentally Educated and Employable Teens).

In addition to the media event, we also had a great workday in the upper and lower gardens. The BEETS (Band of Environmentally Educated and Employable Teens) worked with Rosa Parks parents and volunteers to construct a shed for the pre-kindergarten classes, weeded out beds and readied them for soil, moved a ton of beautiful mulch, and did a lot of composting. The children enjoyed discovering snails, rolly-pollies, and pupas.

They were especially fascinated by a hard and shiny, seemingly sound asleep pupa, but then the tail end began to rotate slowly when they pick it up. Amazingly enough, one of our BEETS, Rodrick told them what it was: Red Garden Tiger Moth. He told them that when the pupa matures into a moth, it has interesting characteristics. The moths colours are ideal for frightening predators such as small birds: the moth normally hides its hindwings under the cryptic forewings when resting. If a threat is perceived, the moth quickly shows its red colour and flies away. In this way, it successfully confuses and warns off the predator. 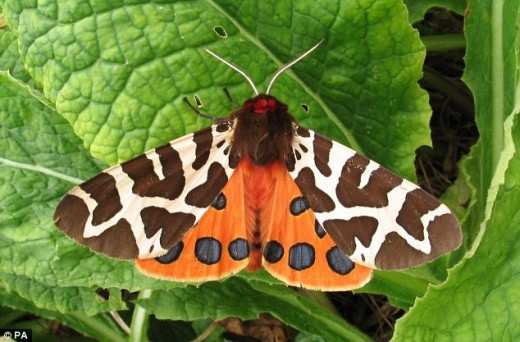